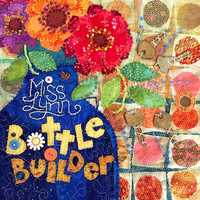 From the recording Bottle Builder

One sand, two carbonates, blend all of these
And heat them up to almost THREE THOUSAND DEGREES
So hot that the solids start to get all runny
Golden drips looking just like honey
Cut some off in an orange-hot blob
And the technical term for this is a "gob"
The gob falls into a mold, you see
Which determines what its ultimate shape will be
Have you guessed? Do you know what shape it will take?
Have you figured out just what it is that we make
At Three thousand degrees, with Two carbonates and
About a hundred thousand times One grain of sand?

So the gob's in the mold, and once it's there
The mold fills up with a blast of air
It blows and blows
and blows and blows
And that molten hot gob just grows
and grows
And the mold falls away like an orange peel
Out of the way, at last to reveal
Impeccably smooth, no blemish or scar
Perfectly transparent, new glass jar
Empty, waiting, this jar is thrilled
At the prospect that soon it is going to be filled
If you want to know what happens, listen well
Because that is the story that I came here to tell
Will the jar be fulfilled or annihilated?
Where will the road lead that originated
With Three thousand degrees, two carbonates, and
All started out with One eensy-weensy,
One teeny tiny
One itty bitty
One nitty gritty
One very very small grain of sand.